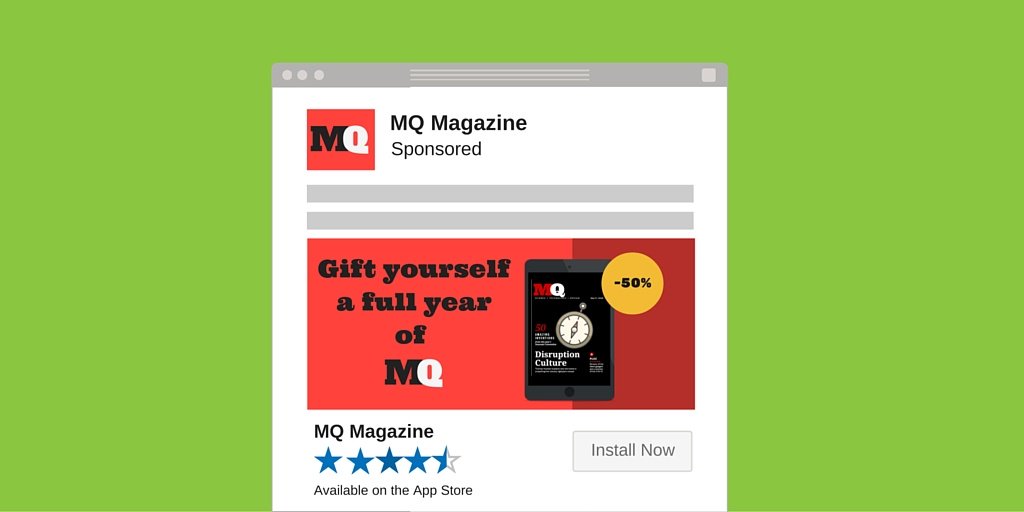 Any app publisher will tell you that paid acquisition campaigns can be a great way to promote your app, drive more traffic to your store and scale your growth. App install ads have evolved in the past couple years, with many of the major social and search channels offering ad products for app publishers. According to eMarketer, app install ads constitute between 30 and 50 percent of the mobile advertising market, excluding search, and will reach $11 billion in the US by 2017.

While performance mobile user acquisition campaigns drive paid traffic to your app store page, recent research has also shown that investing in app ads can also influence your organic downloads. By boosting downloads, even for a short amount of time, your app benefits from increased ranking and visibility on the stores, resulting in more organic installs. Not a bad investment right?

So what exactly are mobile app install ads?

The purpose of using install ads is to get qualified traffic from sources outside the stores, such as search, social media and even other apps, to go to the stores to download your app. App install ads can be text, image or video based, and include a “call to action”, like an install button. While pricing models differ across various platforms, app install campaigns are (for the most part) based on a cost-per-install (CPI) basis. Ad products also differ depending on the channel they appear and may also have different iOs & Android specifications.

If you have both an iOS and Android app, you’ll need to set up separate campaigns as each will link to the specific store. According to a report from Kenshoo, you should also account for differences in user behavior between both operating systems. For example, while ads may be more expensive to market an iOS app, they may deliver better conversions over time. The study looked at over 10 million app installs across more than 100 countries and found that Android users are more likely to click on a mobile app ad, but once they click, iOS users are actually more likely to install an app.

So which channel is better for acquiring new readers for your digital editions? Here we’ll take a look
at Facebook, Twitter, Instagram and Google – the most popular platforms that offer app install advertising products.

Since Facebook launched the app suggestion ad format it is becoming THE app install driver, according to IAB UK. Half of the top grossing apps on the App and Play Store use Facebook App Install ads, and developers says these ads reduce acquisition costs by 15% to 60%. In the first 9 months of 2013, Facebook has driven 145m apps, and revenues have risen from 25 million in Q1 to 74 million in the last quarter. It’s no surprise that a network with over 80 million users can command such incredible returns!

So why is Facebook advertising so powerful? Simple – targeted reach! With Custom Audiences, Facebook gives publishers the ability to target users based on specific demographics, profiles or actions they may have taken on your brand’s desktop or mobile website. It’s also possible to create Lookalike Audiences of your highest value users, based on Facebook’s wealth of data, allowing you to get your install ad in front of a high quality mobile audience.

Twitter also has an ad unit dedicated to mobile app installs, offering another promising channel for publishers to drive downloads. While Twitter’s mobile app ad product is relatively new, it is already one of the largest ad exchanges in the world with over 227 million mobile users and is proving to be a strong opportunity for marketers to reach Twitter’s “real-time” audience.

Much like Facebook, Twitter App Install Cards can be targeted to specific demographics as well as look-a-like and tailored audiences for advanced acquisition campaigns. While this landscape is relatively new, a quick look at your feed and you’ll see rich, mobile-first ad units designed for compelling an attention-grabbing user experiences. 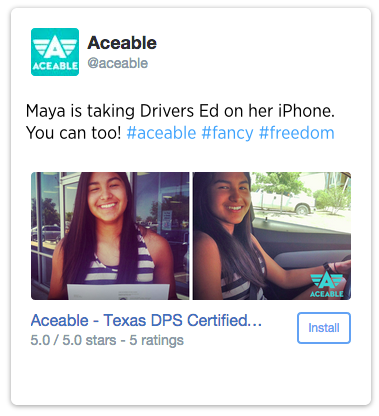 With over 300 million monthly active users, Instagram is a mobile-first social network that is hard to ignore. Instagram is set to bring in $595 million in mobile ad revenues worldwide in 2016 , and $2.81 billion by 2017, thanks in part to “action-oriented” ad format, including app install ads. App install ads include an install button that opens a mini-browser within the app, so once a user has downloaded the app they will return to Instagram.

Instagram advertisers can target ads based on age, gender and country- and soon will also be able to tap into a wider range of demographic and interest data, much like Facebook’s Custom Audiences (which owns Instagram). More powerful targeting combined with a large adoption by teens and young adults makes Instagram an exciting space for advertisers. 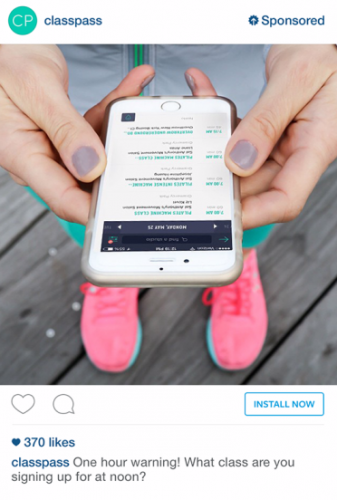 For more information on Instagram Mobile App Ads check out this post and read the Ad Design Guidelines.

As the largest search engine in the world, Google has 1.17 billion monthly unique users – proving to be one of the biggest channels to reach potential app users – especially for Android – and a few different solutions for app publishers. With Google AdWords you can create ads for your app in a variety of formats to show across the Search, Display and YouTube Networks.

Search Network campaigns are a great way to drive downloads from people who are actively searching for a solution your app provides. Mobile app install campaigns are set up by bidding on keywords and are optimized for targeting app-specific searches across Google.com, Google Play (for Android apps), and Search Partner sites. Unlike Facebook and Twitter, app install ads on the search network cannot be targeted according to user demographics, so researching keywords in fundamental to the success of your ads.

Instead, advertising on Google’s Display Network can help you can reach people while they’re using other apps that are similar to yours. These campaigns often get large volumes of impressions, which can increase awareness of your app and attract new app users who may not be actively searching for you.

YouTube, on the other hand, is the largest video sharing website has 1 billion monthly active users, of which 550 million are on mobile, making it a great channel for app publishers. On YouTube, you can show video ads to reach people who are interested in content related to your app. Video campaigns can help boost awareness of your app with engaging content that grabs your customers’ attention at just the right moment.

For more on Google App Install Ads across the various networks see this post.

With all of the options available, publishers can experiment and see which platform performs best. When it comes to creating successful app install campaigns there are two things to remember, 1) get your ad targeting right and 2) make sure your ad creative actually convinces people to click on it. Here are some tips to get started:

Are you using app install ads? Share your best practices in the comments!