The success story of Dagens Nyheter and the digital first transformation of La Stampa.

In April 2019, an article entitled “Digital first, at the service of the reader: the winning recipe of Dagens Nyheter” appeared in the daily newspaper La Stampa. From tomorrow (March 3rd) La Stampa will be the first traditional Italian newspaper to adopt the digital first approach.

Dagens Nyheter is the first Swedish newspaper, with 150 years of history. In twenty years the paper copies sold have halved. There were no alternatives. Continuing to focus only on paper would have meant being overwhelmed by the Web and free news websites. That’s why Peter Wolodarski, the young editor-in-chief called in 2013 (at 34 years old) to face the structural crisis, has introduced a radical change in the organization of work and in the editorial culture, according to the digital first mindset. 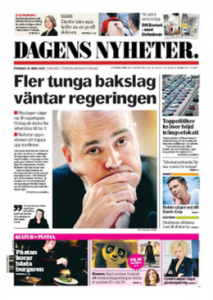 Digital, subscribers and quality journalism: in this way Dagens Nyheter has recovered from the crisis. There are editions for tablets and mobile phones, the pdf and evening versions, thematic newsletters and podcasts to listen to, such as the agenda with the events of the day. And still the 360-degree videos, the reconstructions through virtual reality, and finally the newspaper, the paper one, which at the weekend is enriched with various supplements, from culture to travel, work and school, home and technology.

Dagens Nyheter offers his readers an all-round offer. With one goal: to get them to subscribe, convincing them that quality information has its price.

A strategy that in five years has brought the number of online subscriptions from 2,000 to 160,000, and this while the diffusion of the printed newspaper decreased from 250,000 to 170,000 copies. Raising the revenues and also the mood of the editorial staff that has enriched itself with 70 hires. Including a lot of innovation and experimentation, with regard to the offer of content, the technologies and the subscription formulas. 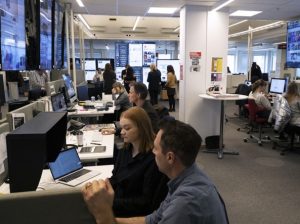 “First of all our journalists work on digital” says the editor-in-chief. “After that we also produce a paper newspaper. This has been the most important change in the past five years. Before, we were convinced that the editorial staff of the newspaper was the heart of our organization. Ever since we focused on subscriptions, we understand that our future is digital. We love newspapers and will continue to make one for a long time. But paper is on the decline and makes our work unsustainable in the long period. So we organized ourselves to think digital first and then we have a small editorial staff dedicated to the paper newspaper production. Six, seven journalists who produce the entire newspaper, taking up the articles published online and repaginating them for the print version. So we have seven journalists who pack a 48/56 pages newspaper throughout the week, which exceeds 100 pages over the weekend; and all the rest of the editorial staff – we are 220 altogether – who must only think of making quality journalism”.

The common element of Dagens Nyheter, regardless of whether it is read on paper, tablet or mobile phone, is that it has almost nothing for free. “Our core business is information, and we never forget that quality journalism has a cost. On our website you can read 3 articles for free, but only if you are registered. To continue you need to subscribe. We do not sell single articles, only subscriptions, even if with very different formulas: we have one-week subscriptions, and others combined with the newspaper edition of the weekend, for example”.

“We have a conversion rate of 55% thanks to a particular method of paywall: the most read articles, after three or four hours and by decision of the journalists, cease to be free. To achieve this we have developed also a very simple and immediate digital payment system.”

“No. Page views are one thing, but we also measure other parameters such as reading time, the conversion rate to subscribers, social engagement. We have a broader look. In the past, when we considered just traffic, we had a disconnection between newspaper and site. Today our entire offer is aligned, and what we choose journalistically also works for our readers. In the past, advertising accounted for 70-75% of total revenue, and it mostly came from paper. Today 70% of the revenues come from subscriptions, while advertising generates only 30% of the turnover, and if we only consider online advertising the share is even less.”.

Is the readers’ response to your articles important to your editorial choices?

“Yes, that’s why we have a completely transparent working method about reader engagement and loyalty. All data on page views, reading time (the most successful articles have between six and seven minutes active time spent), visit frequency, etc. are projected in the editorial room on large screens. So everyone can follow what’s going on, then two emails a day summarize the progress of the site, with the performance of each article. It is essential to know how our work is received. Articles that convert at a higher rate are investigative pieces, original reporting, long-form storytelling and in-depth/guides. Acquiring subscribers is quite easy. Keeping them is much trickier. We are very happy because we have halved the churn rate from 15% to 8%. For readers who have subscribed for over a year, churn drops to 1.2%“.

Have you investigated your readers, who prefers the printed newspaper, who the digital one for example?

“Subscribers to the traditional newspaper are our oldest readers, aged 60 and over. However, there are also younger readers, who perhaps prefer to receive only the weekend edition. While subscribers to the digital edition are 40 years old or less. But be careful, because regardless of age, these readers have many things in common. They have the same desire to get informed and participate in what is happening in our society, have cultural interests, follow politics, want to understand more about the economy, the world, technology. But in essence they are attracted to the same form of journalism that we do, both in the printed newspaper and in the digital version. That’s why we do not distinguish in style a piece that goes online from one that is taken up on paper. Of course we adapt the title, the layout, the illustrations and also the length of the texts, but in the end they are the same articles proposed in a different way”.

The success of Dagens Nyheter comes from the company’s organization around cross-functional teams, plus a a keen eye on first-party-data analytics.

Artificial intelligence and machine learning can be used for advanced real-time targeting, and personalized news, based on online behavior and content consumption. Mobile data generation is projected to more than double by 2022. And by 2025, digital data generated globally will increase more than 3x. Publishers stand to gain from this as they own valuable first-party data. In fact, according to IAB’s latest report, Brand Disruption 2020, more than half of first-party data has yet to be tapped. “The winners will be those heavily armed with first-party user data—and have ways to continue to build and maintain that data—and that do/will sell ads and that will/do create content.”

Do you want to increase your readers’ engagement?

Download our free guide and learn all the tactics to stay on top.

Dagens Nyheter is an international case study and has certainly been carefully analyzed by the Italian daily newspaper La Stampa, one hundred fifty-three years of history, rooted in the North West, European identity, Atlantic vocation. From March 3, La Stampa will embrace the philosophy of digital first and will start the process of revolutionary change for the new Gedi group (Repubblica, l’Espresso, local newspapers, Radio Capital, Manzoni).

As usual the print version of La Stampa will be every day in the Italian newsstands, with a more refined and streamlined product (from 40 to 32 pages), but the real novelty will be the non-stop offer of digital content, with the stated objective of enrich the information production from 7 in the morning to 1 in the night. The new digital first publication will have integrated paper and web desks and will divide the editorial work into Hard News, Soft News and Sport. Some of the historical annexes of the newspaper (such as TuttoScienze, TuttiGusti, TuttoSoldi), will become vertical channels on the website, while TuttoLibri, TuttoSalute, Motori and Torino7 will remain paper. At the headquarter the day will be splitted in two work shifts with about forty journalists each, there will be four editorial meetings to decide how to cover the day’s events for the paper newspaper and first of all for the Web.